How Do Thai Curries Differ from Indian Curries? 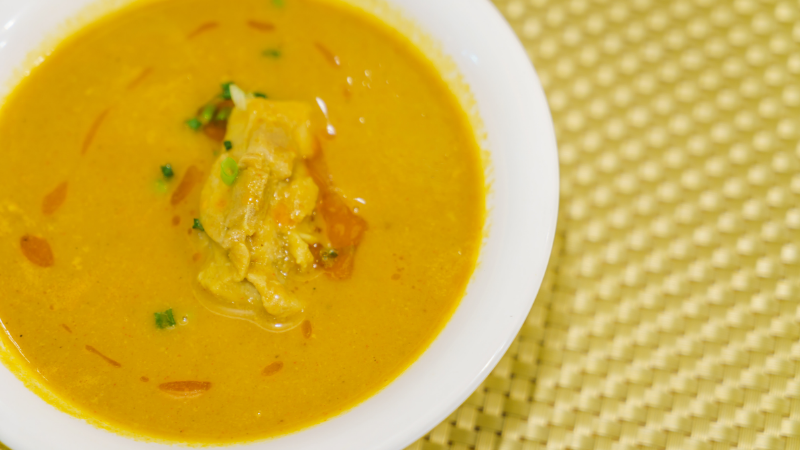 How Do Thai Curries Differ from Indian Curries?

Curries are the ultimate love. I believe that this is for almost every other person on the earth. If you are wondering about the reasons, then there are plenty of them. Primarily curries are liked because these are easy to savor, super delicious in taste, and go well with anything that you may like.

For instance, Indian curries of almost all sorts pair the best with rice or Indian bread. The same goes for Thai curries too.

Curries are packed with flavors and spices, and why to forget the immense dose of love from our chefs in curries of Mint and Basil, the Best Pan-Asian Restaurant in Hong Kong.

Whether it is a Thai curry or Indian curry, these both are just another reason to enjoy the food with extra deliciousness and joy.

But first let us understand the basic definition. 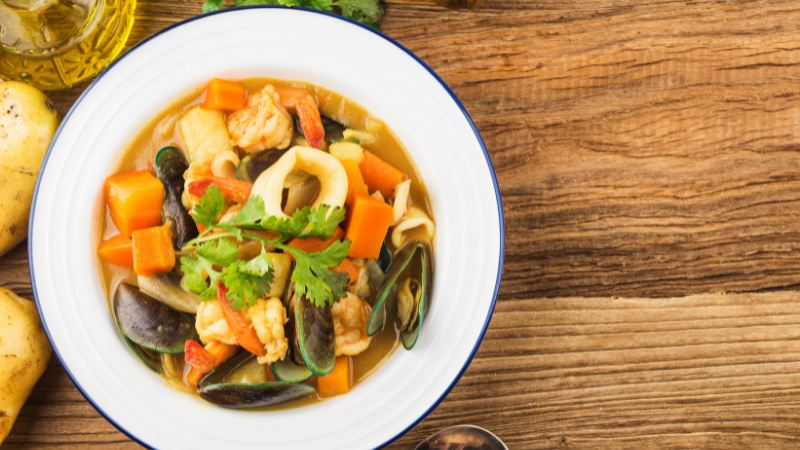 Today, curry is not just a curry. It is a large term now, quite the opposite of the alphabets it has. Curry is used to describe different dishes in many different cuisines.

There are many types of curries but the famous of all are just two i.e., Indian and Thai curries.

Even though both curries are broth-based dishes, these are made with different ingredients and have entirely different flavors.

In this blog, I will talk about the differences between the two. But before that let us see curries in detail.

Curry, generally means any food that comes from Asia (especially from India and Thailand). Curries have a soupy or stew-like consistency and these are often eaten with rice, noodles, or bread, depending on the country of origin.

You would be surprised to know that for both Indian and Thai, the word curry was referred by the British. It is believed that the British anglicized the word “KARI”- the name of a specific South Indian gravy dish.

The word curry now is used for almost every Indian dish which has gravy. The same goes for Thai cuisines too.

In both the countries, curry is often used on English menus but this is not frequently used when speaking the local language.

For the foreign tourists who visit India or Thailand, curry is the easiest and the best way to refer to a particular dish with gravy.

In India, vegetable stews and in Thailand, soups are referred to as curries. However, both differ in the flavor, ingredients and also methods of preparation. 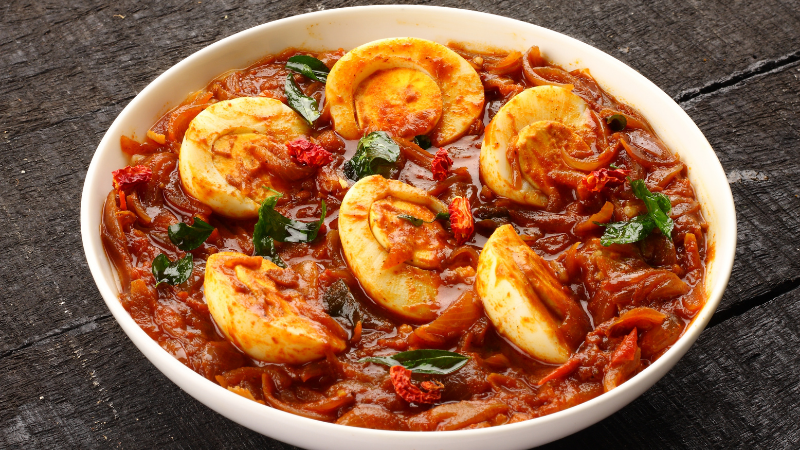 As already said above, the word curry has a wide spectrum. There are a lot of dishes that are covered under curries.

Out of all egg curry and chicken curry are probably the most popular versions of the dish. However, both are cooked differently depending upon the region.

For instance, in South, people add coconut milk, tamarind, and even curry leaves to the curries. In Goa and Kerala, fish curry is relished. Fresh ocean fish is added to a spicy and flavorful red gravy.

In the Northern India, chicken curry while in the rest of the country, egg curry and veg curry are commonly served.

When it comes to Thai curry, there are green, red, and yellow curries. Out of all these three curries, green curry is often the spiciest.

Thai yellow curry is often the sweetest and mildest. Whereas, green curry has a hot and bright flavor because of the ingredients like chilies and fresh citrus fruit.

Red Thai curry is also spicy but at the same time, it has a hearty rich flavor as well.

Needless to say, the taste of the two dishes varies only because of different ingredients used in the Indian and Thai curries.

Then the curry paste is added to a pan with some oil. Both are sautéed and then coconut milk with vegetables, fish sauce, and meats are added.

In Thai curries, red chilies are used whereas in Green Thai curry, you will find green chilies. Chicken and fish are also added as common meats

In Indian curries, the base is often made from tomatoes and onions which are sauteed until soft. The gravy is then seasoned with dry spices such as cumin, coriander powder, turmeric, red chili powder, and cinnamon.

In South India, people in some areas also add coconut milk to their curries, while most other regions many people don’t. Rather they add yogurt, water, cream or even butter.

Indian curries are either vegetarian or non-vegetarian. Vegetarian curries include a lot of veggies and non-veg curries often include chicken, fish, or mutton.

Because both Thai and Indian curries use different ingredients, these will obviously will have different flavors.

But let us see, how and what makes both the dishes different.

As both the dishes are called curry and are made in Asia, these have flavors that couldn’t be more distinct from one another. 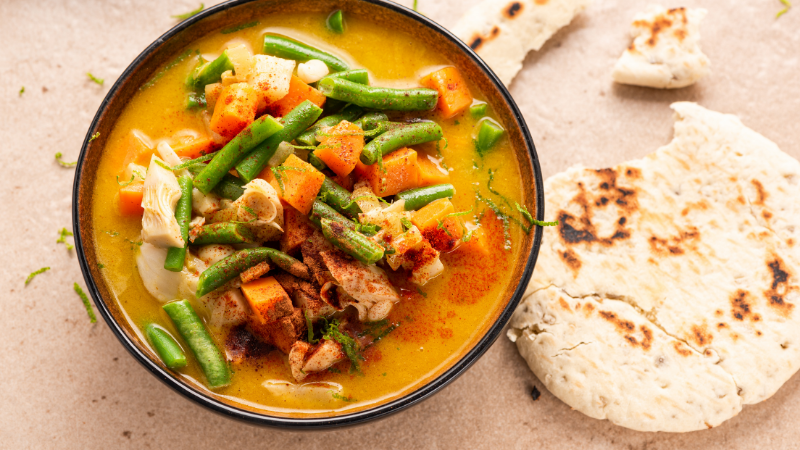 These curries often have a thinner consistency and a brighter flavor.

When you eat Thai curry, you will get to taste fresh herbs and bright citrusy hints from lime leaves and lemongrass.

In Indian curry, you are most likely to get the taste of rich Indian spices like cloves, cinnamon, cumin, and turmeric.

Many Thai curries contain coconut milk whereas very few Indian curries do so.

Coconut milk is used as a base liquid. For a good Thai curry, it is important to use the right and good quality coconut milk.

Although coconut milk adds a slight thickness yet it helps in keeping the soup-like consistency of the dish.

In India it is not very common to add coconut milk but in North India, people often only add water or a small amount of cream, ghee or butter.

To thicken the consistency of the curry, most Indians also use blended onions or tomatoes.

South Indians are more likely to include coconut milk in their curries to give a hint of sweetness.

Indian curries are made by heating oil in the pan and then adding a combination of dry spices. Those are toasted until fragrant.

The spices like cumin seeds, coriander powder, cinnamon, turmeric, and red chili powder are used. Many people also use widely used spice called garam masala – it is the mixture of around 10 spices.

Thai curry, on the other hand, is made by using coconut milk.

For both Thai curry and Indian curry, spices and masalas are available in the grocery store but at the Best Pan-Asian Restaurant i.e., Mint and Basil, chef make these spices all by themselves.

Thai curry paste is made by mashing ingredients like fresh lemongrass, shrimp paste, ginger, and garlic in a mortar.

If you do not like hot foods, then it is suggested to go for Thai yellow curry. It is mild and sweet whereas both Red Thai and Green Thai curries are hot.

Dairy products like clarified butter, ghee is used. These are added to the spices which are usually dried up.

Indian curries may also use ingredients like cream and yogurt to thicken the consistency.

Thai curries on the other hand do not use dairy products. Thai food is usually cooked in coconut oil and peanut oil.

The heading itself explains. I would like to add here. Indian curries are also eaten with cooked Indian breads like roti, naan, etc.
Curry leaves are sometimes used in Indian curries.

This is the last and one of the major differences i.e., the use of curry leaves.

Surprisingly, curry leaves are not used in all Indian curries.

On the other hand, Thai curries almost never use curry leaves.  Instead, these use lime leaves and lemongrass for a tangy flavour.