What to Eat at the Best Vietnamese Restaurant in Hong Kong 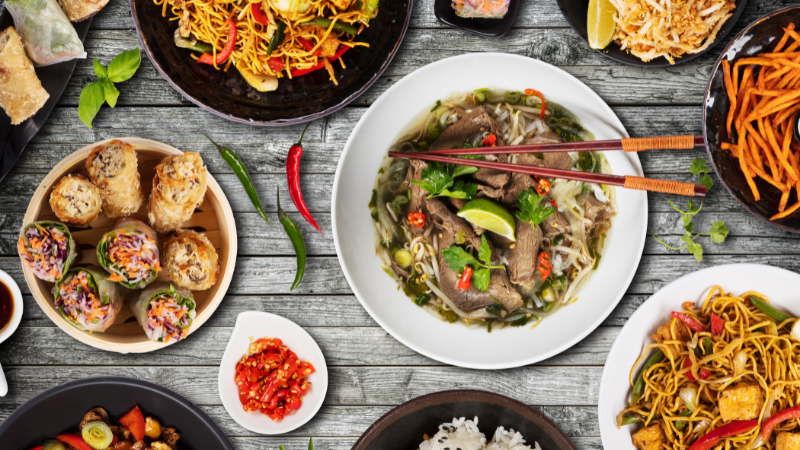 Choosing to eat Vietnamese in Hong Kong is a great decision though!

A) Because you are going to have the healthiest food ever.

B) Your pocket will still be not hurt and the food will be super light and delicious.

Before you head onto the best Vietnamese restaurant in Hong Kong, let us understand what makes Vietnamese cuisine unique and special?

The Vietnamese cuisines are cooked with the minimum use of oil and dairy. It relies more on the fresh, light flavors of veggies, and herbs. This is the reason Vietnamese food is considered one of the healthiest in the world.

What Makes Vietnamese the Best?

There is no doubt the way Vietnamese food is cooked is the best. But other than the method of cooking, the ingredients used make it even more loved by people around the globe.

If you are in Hong Kong and crave something light, mouth-drooling as well as budget-friendly, prefer eating Vietnamese only at Mint and Basil, Tung Chung.

Over time, Vietnamese food has also got certain variations as it has reached every nook and corner of the world. Depending on the climate and geography, Vietnamese food has got variants. But when you are at Mint and Basil, your taste buds will be transported to Vietnam through our variety of dishes, drinks and super exciting offers on both.

Just to add to your information about Vietnamese food, Northern Vietnam supports less spice growth or cattle-rearing. This is the reason the dishes are milder with an emphasis on freshwater ingredients like fish, mollusk, and crabs. When it comes to Central Vietnam, it turns up the heat with plentiful chilies and other spices. But the food is still light, healthy, and appetizing.

When you are at a Vietnamese restaurant, you will find a variety to choose from. If you are a beginner and are not able to decide where to start from and what to eat, then here is the list of delicacies you might want to try in Hong Kong. 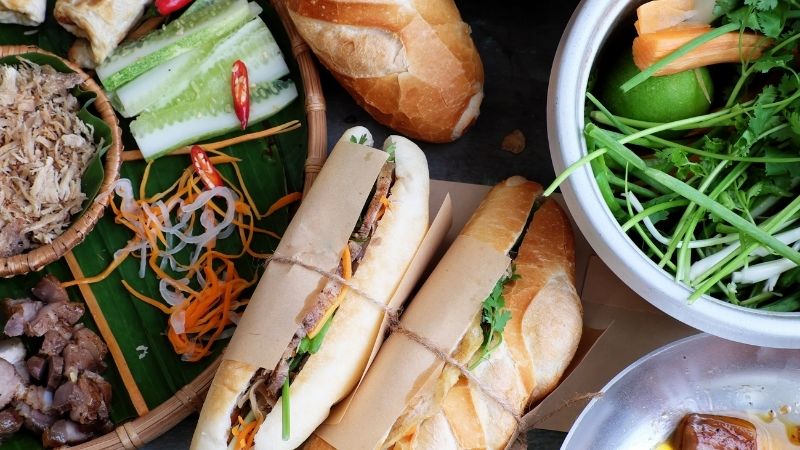 When it comes to Vietnamese food, most people think of two things: pho and banh mi. Pho means aromatic noodle soup. It is widely considered to be Vietnam’s national dish. Banh mi is a flavor-packed oblong sandwich filled with ingredients like pickled carrots, chargrilled pork, and liver pâté. This is quite inexpensive and yummy.

But just like Mexican food comprises more than tacos, Japanese food is much more than sushi, Vietnamese food is also made of more than pho and banh mi.

What more do you ask for?

From noodle soups and beef stew, to epic fish preparations, and rice cakes, these dishes can be found at exciting Vietnamese restaurants around the Hong Kong.

This is the dish that Anthony Bourdain introduced to President Obama during the Hanoi episode of his CNN TV show. It is the one you should introduce to your lunch or dinner plans too. 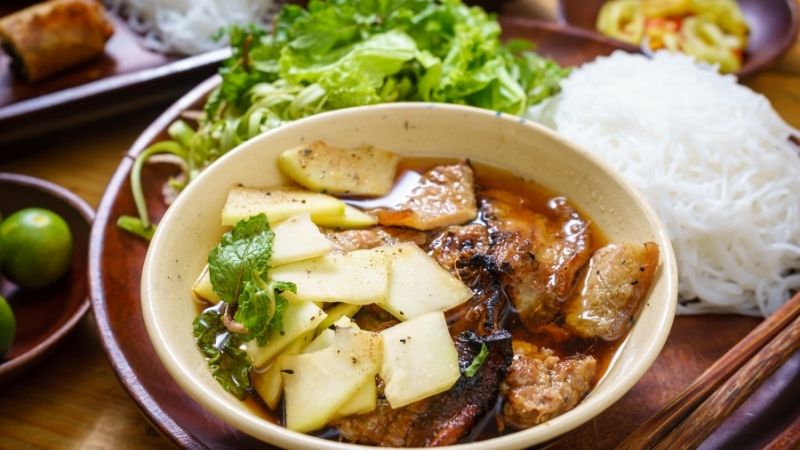 The dish includes slider-sized, mini ground pork patties whish are steeped in a diluted sweet and savory fish sauce. It is served with rice vermicelli noodles on the side and a plate of lettuce and herbs. Bun cha bun means rice vermicelli, cha means the pork patty. It is essentially a deconstructed version of the popular chargrilled pork and noodle bowl also known as bun thit nuong.

In Hanoi, this dish is called bun cha. But everywhere else, Hanoi is added to name of the dish just to indicate its origin. To eat it you assemble noodles, meat in small batches, vegetables, drizzling a bit of fish sauce in the bowl, and slurping up the noodles.

Although, it takes some efforts, and can even get a bit messy but the interplay of fresh veggies, crisp, springy, rice noodles, and smoky, charred pork is great.

Bo kho is the Vietnamese version of France’s boeuf bourguignon. It is made with beef shank and tendon. Both are stewed in a lemongrass and five-spice-scented broth. The dish is simple and is typically served with a loaf of just-toasted, plain banh mi bread on the side.

To eat it, you have to tear up the bread into bits and dip it in the sauce before lapping it up with a bite of fork-tender meat and carrots.

Cha ca is a dish of grilled white fish chunks which are marinated in turmeric and galangal (an aromatic root herb just like ginger). It is served with fresh dill, peanuts, rice vermicelli, and crispy puffed rice paper also called Banh Da. 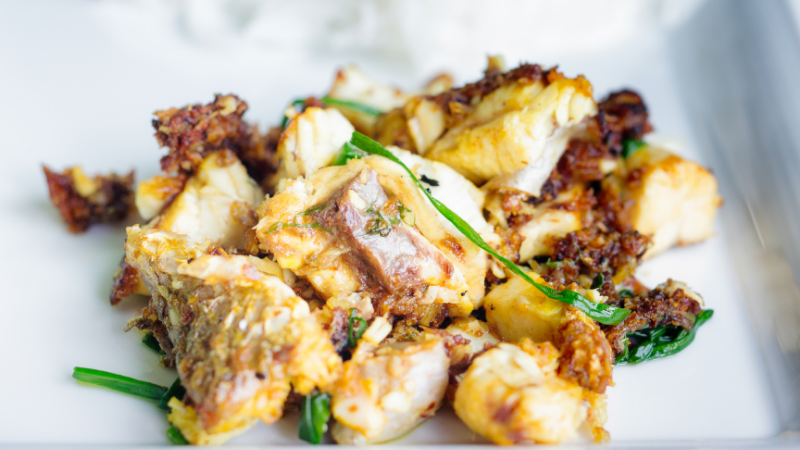 The ingredients of the dish come separately and you are required to assemble them at the table. Just start by adding rice vermicelli to your bowl then top it with peanuts, dill, and break up the puffed rice paper into small pieces.

Drizzle some mam tom i.e.,fermented shrimp paste and pineapple sauce. Then, mix it all up before eating. The sauce gives a deep, pungent funk to the dish. All thanks to the fermented shrimp base. But then, it is what makes the dish so good. 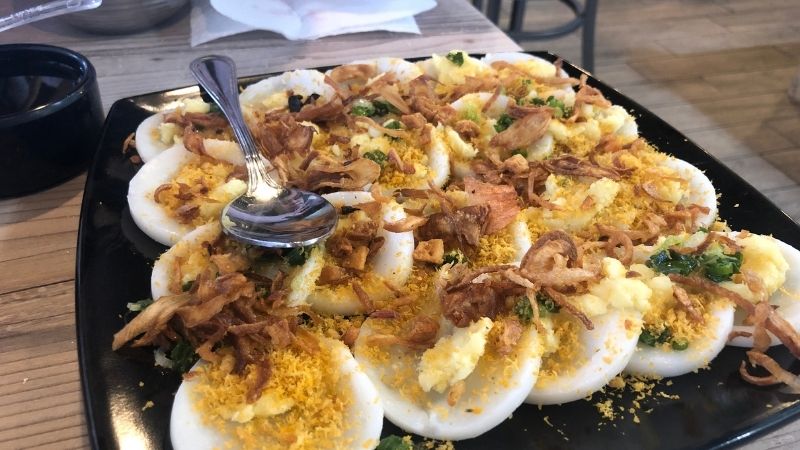 Traditionally, it is eaten as an afternoon snack, or as an appetizer dish. It is now commonly eaten, ordered as a lunch or dinner entree for one. It is topped with some variation of crispy pork fat and/or pork skin which is minced shrimp and fried shallot. The cakes are usually served in a tray of 9 to 12 little saucers with a small metal spoon and a bowl of mild nuoc mam pha that is mixed fish sauce. 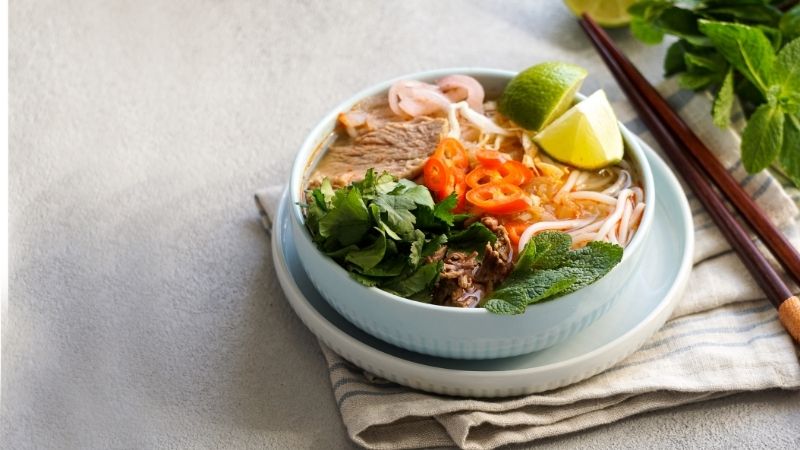 It might seem a bit daunting but if you are willing to dive tongue first into this spicy soup, a specialty of the Imperial city of Hue in the Central region of Vietnam, you will never want to eat anything else. It is served with thick, udon-like noodles and the broth is simmered for hours with lemongrass and other spices. In combination, it yields a robust, full-bodied, umami-laden flavor-bomb for a meal which is just unparalleled. 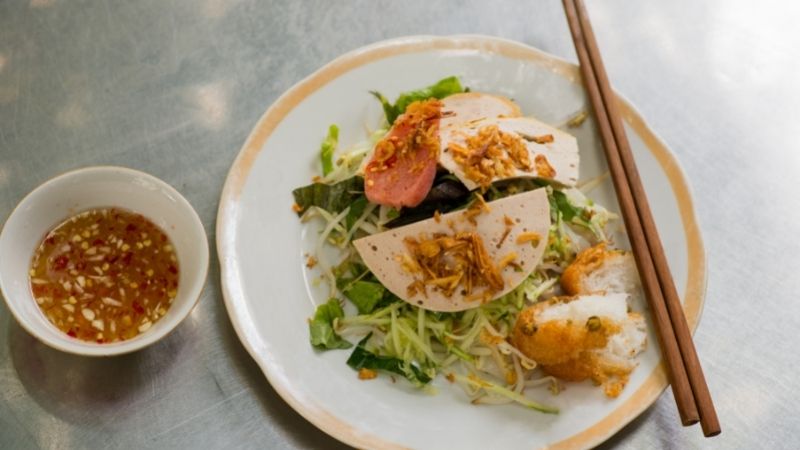 This dish is a Northern Vietnamese specialty. It translates into a rolled cake, Banh Cuon is made of steamed, translucent rice noodle rolls. These are served either plain that is banh cuon thanh tri, filled with ground pork and wood ear i.e., banh cuon nhan thit, or even stuffed with shrimp that is banh cuon tom. It is delicate and slightly glutinous in texture. The rolls are made from the thinnest noodles. These are served with blanched bean sprouts and slices of Gio, a Vietnamese pork cold cut similar to bologna. These come with a nuoc mam cham for dipping. It is typically eaten during breakfast or for lunch. 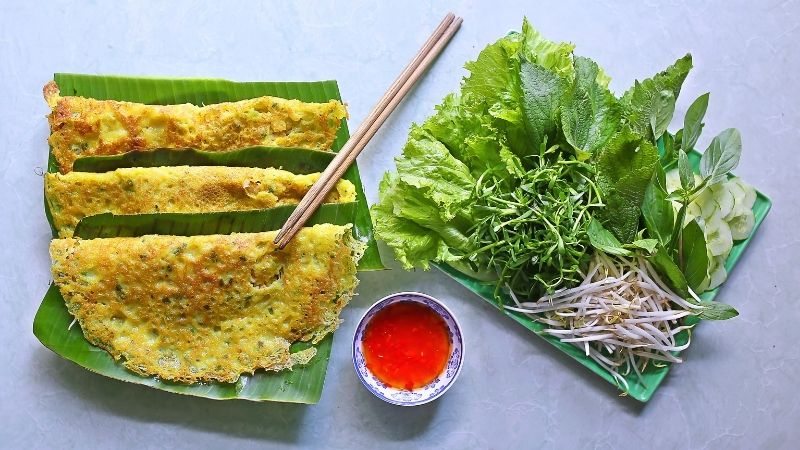 It is made from rice flour which is flavored with turmeric and coconut milk. Banh Xeo means sizzling cake. It is the Vietnamese version of a savory French crepe. It is filled with bean sprouts, shrimps, sliced pork belly. This Southern Vietnamese dish can be ordered either as an appetizer or even as a main dish. This dish is light and delicate with textures reminiscent of Japanese tempura. This dish is the best when dipped in a sweet and savory nuoc cham fish sauce. 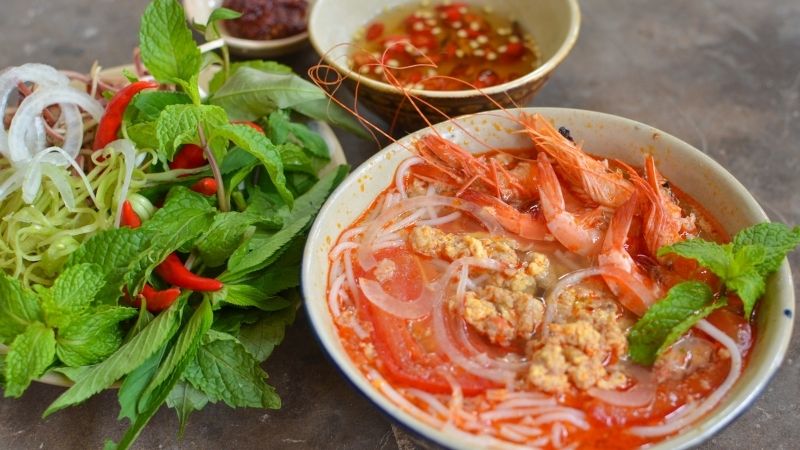 If you are a crab fanatic, this dish is for you. It is a rice vermicelli noodle soup which is made with tomatoes and crabs. Bun Rieu is one of Northern Vietnam’s most popular meals. Both the broth and topping of this dish are made from rice-paddy crabs which have been pounded into a paste.

The paste and juices of the dish is prepared using tomatoes until these curdled crab patties float on the top. As a result, you get a tangy and savory soup. The dish is also topped with crab, green onion, and cilantro for freshness. The fancier version of this dish includes cubes of fried tofu and congealed blood cubes, or even huyet. There is another variation and that is Bun Rieu Oc, which comes with chewy and crispy escargot.

Vietnamese food has made its presence all around the globe. Today, no matter where you are, you can have it anytime you want. Especially, if you are in Hong Kong, you can definitely have the best Vietnamese food, made with love and attention to hygiene.