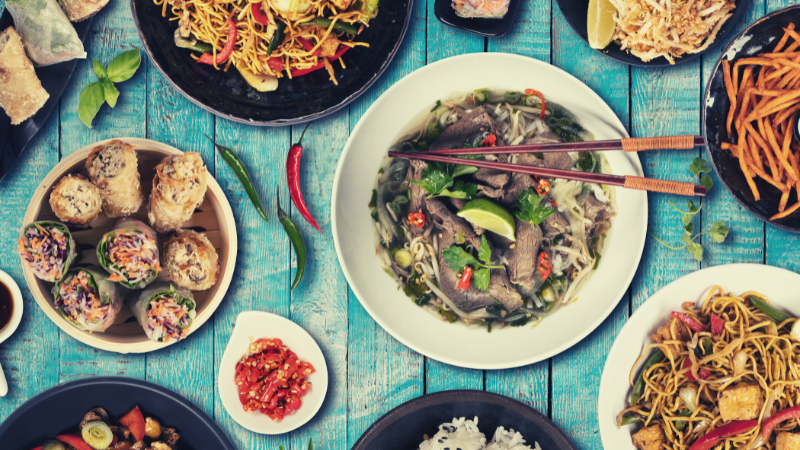 While most people think of Thai food as somewhat consistent, it is anything but not uniform!

Due to several factors like weather and culture, various regions of Thailand have different types of food!

There are four central regions, and we’re going to converse about them all here to help you better understand Thailand’s culinary diversity.

The food in this province is the outcome of a wonderfully diverse melting pot of several other cultures and ethnicities. For example, there are the Lao, Burmese, and Shan peoples in this part of the country, along with native tribes such as the Hmong and Karen.

The climate of this region is moderately calm, and food has always been plentiful throughout history. The food here is generally described as least spicy of all the areas and uses many dried spices, and this may come as a surprise, as Thai food usually comes with fresh herbs more primarily.

The rice in this region is commonly served sticky, a great way to help the side dish, making stuffing easy.

Finally, the region’s overall savor profile is defined by the prevalent bitterness of the food. This bitterness is a pleasant taste, if acquired, and arrives from several leaves, shoots, and seasonings. Fresh turmeric also appears alongside these spices, indicating that traditional northern dishes are warming and bitter rather than solid and spicy.

This flavor-loaded meal is a true testament to rich cooking – the coconut curry base is completed with both boiled and deep-fried noodles and complimented with pickled mustard greens, shallots, lime, and ground chilies fried in oil. These ingredients blend to form a special dish with a lot of force and resilience behind the creaminess that you get.

Northeastern Thailand has been a reasonably isolated section of the country recently. Several mountains isolate it from the rest of Thailand, which means that many meals from this region take inspiration from neighboring areas like Laos and Cambodia.

Poverty has been a massive part of the people’s lives in this region for many years, which means that the food is made to be quite potent in small portions.

For example, a meal may have a big bowl of sticky rice serving with a relatively small quantity of pungently fishy or zingy curry. This powerfully flavored curry spices the rice, creating a larger meal perfect for filling bellies.

The essential herb of the region is unique, like plaa raa, which is a dense, rich, unfiltered flavor of fermented fish. This paste has a very intense flavor, which means that only a small portion must be used to season a large part of the food. This is the same perspective as dried red chilies are used in this cuisine. The food is very spicy and fishy, ensuring an accepted taste. 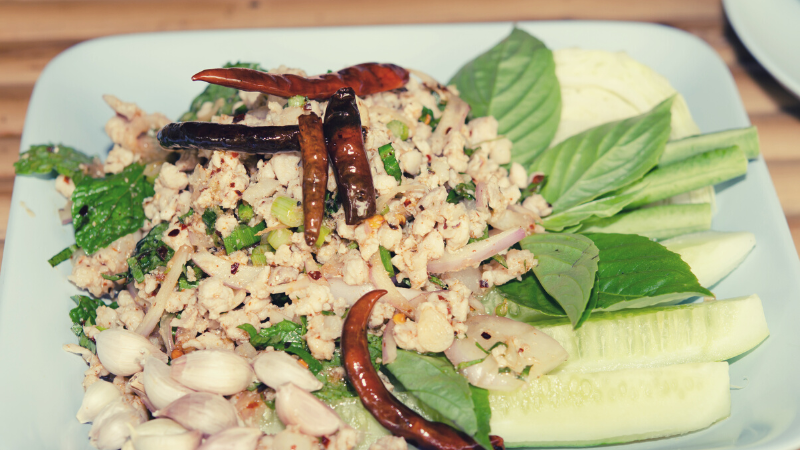 Laab is a sort of minced meat salad that is cherished around work. Typically, the plate includes ground or finely diced pork tossed with mint leaves, scallions, some lime juice, dried chili, and rice. Altogether, the dish is really bright and incredibly flavorful – it is loved the world over!

Some variations of lamb can be made like chicken, liver, or fish – though vegetarians might prefer a version made with minced tofu or mushrooms. Some cook a version with raw meat and some blood, but those aren’t for the weak heart.

The flavor in general is very saline and smoky due to the fish sauce and chili peppers. This means that the herby treats are highlighted by being near to a wonderfully harsh base. The mint helps to tie jointly the bold flavors and the bright, guiding towards a remarkable dish.

The primary thing that represents the cuisine of central Thailand is the fertility of the soil compared to the other regions. There is an incredible amount of fruit like tamarind and coconut available, plus it’s near to the Gulf of Thailand, which means fresh seafood takes a front row. Fish, shrimp, crabs, and mollusks are an essential part of the cuisine here, leading to a tremendous range of tastes.

This province is also one that contains the country’s capital, Bangkok. This means that the region brings a lot of money and tourists, leading to people counting their tastes and famous spices to the mix. Over time, this has created a beautiful myriad of cuisine.

While the food here is spicy because of the fresh chilies, it is nowhere near as fierce as Southern or Northeastern food. The normal spice levels are complemented by sweetness from palm sugars and excellent delinquency from regional vinegar and fruits. The fruits used to make most of the dishes in this region are lime and tamarind, both of which are loved for their sharpness and intense flavor.

Due to its immediacy to the Gulf of Thailand, this region’s seafood makes up a principal amount of its civilization.

For example, the salinity of shrimp pastes and fish sauce is an explanatory taste of the region. On top of this, fresh fish makes up most of the protein consumed in this area.

Coconuts are something that many people think of when imagining Thai food, and while the South has the cartel, coconut cream can be seen in central Thailand. It adds prevailing richness to a dish, which helps balance out the spice and sharpness of some other necessary ingredients.

These concentrated flavors are counterpointed by the creaminess of the coconut milk in which the elements rest. This addition helps to balance the general spiciness of the dish, and sharp lime juice and palm sugar help to obtain the whole plate to a tasty balance.

You must visit Mint and Basil for the best tom kha gai and other Thai dishes in Hong Kong!

This is the cuisine that most non-Thai people imagine when they imagine Thai food they have once eaten – both quite spicy and quite creamy, gratitude to the goodness of coconuts.

The region has a considerable Muslim population and a lot of coastlines. Together with the low temperature and highly fertile soil, you get cuisine that eats hardly any red meat, rather than favoring fish where possible. When people of Southern Thailand eat red meat, it is commonly goat and mutton.

The cuisine is described by coconut and fruits, which bring both creaminess and warmth. The heat is typically bought to the plate by dried chilies, also known as Thai chilies. Many warming spices attend these hot chilies, such as refreshed turmeric, cumin, and cloves. This means that superbly cooked Thai food hits the ideal balance between warm and hot – permitting people an utterly unique taste triumph!

The salty and funky flavor of the food is described by shrimp paste and fermented fish sauce. This combination creates an influential base for food, which is facilitated by the keenness of sour fruit like pineapple and tamarind. The best chefs from Southern Thailand are professionals in striking the ideal balance between these two extremes. 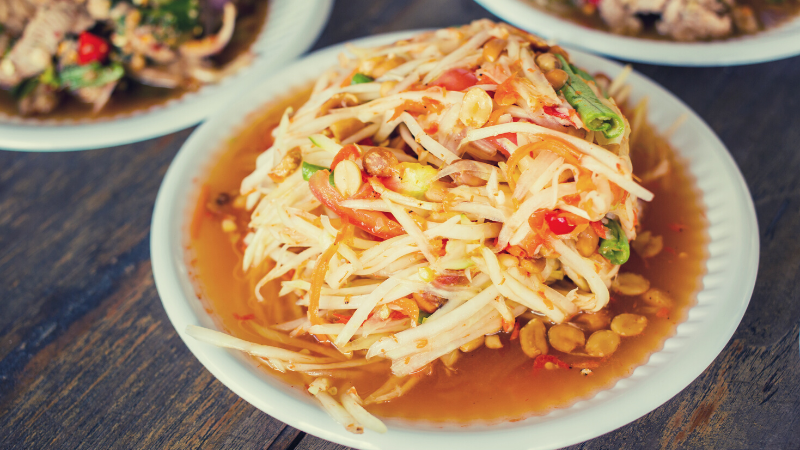 This incredible dish is a taste smash, which means that when the flavor is compared to traditional Western food, it is more like a breath of fresh air, like a wake-up call!

The soup’s flavor can best be represented as orange juice, which has stood on fire. That makes it display a bit strange, but we assure you that we’re saying that with the most extraordinary kindness!

The name implies ‘sour curry,’ though the soup itself is more than just sour in Thai. It has a fish base mixed with Thai curry paste and turmeric – this results in a casserole with a vibrant yellow color that goes with the sharp savor wonderfully.

At Mint and Basil, we serve the best Thai food in Hong Kong!

Our chefs prioritize the authenticity of Thai flavors and the blend of spices to serve the classic Thai food on your plate.

What is Typical Vietnamese Food?