A Guide to Thai Spices and Cuisines | Mint & Basil 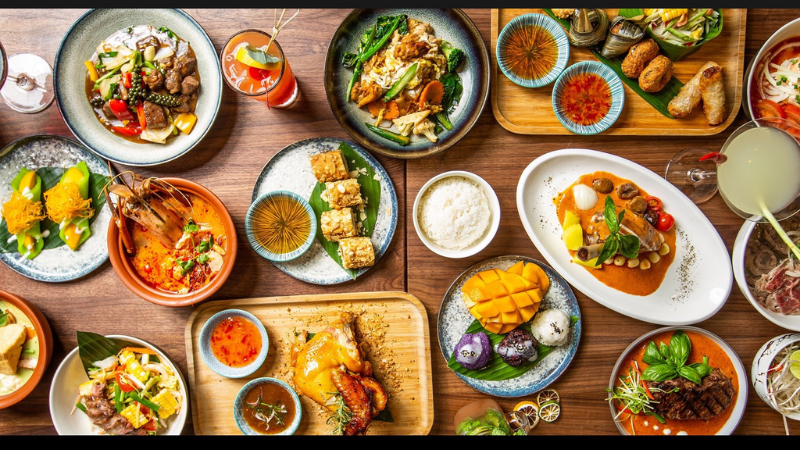 A Guide to Thai Spices and Cuisines

History of Thai Cuisine and Its Origin

Let me take you back to the history – the past of Thai cuisines and their origin.

Since the sudden rise in tourism to Thailand in the 1980s, Thai food has established its foothold as one of the world’s leading schools of the culinary arts. Today, it has become one of the most popular food types in the whole wide world including countries like  Indian, Chinese, French, Italian, and Thai.

Besides that, these are the cuisines you can enjoy being in any part of the world. Also, you do not have to particularly be in China to eat Chinese food, France to eat French cuisines, Thailand to eat Thai food, and even Italy to relish Italian food.

If you are in Hong Kong, you can anytime eat Thai, Indian, or even Vietnamese. Yes, without affecting your pocket and that too from one of the best Thai restaurants in Hong Kong.

Thai food originated centuries ago and came into existence with the emigration of people from the Southern Chinese provinces into Thailand. Historically, there were many Szechwan influences too. Not just this, over the centuries many other cultures have also had their influence and have affected Thai food.

Also, in the distant past, Buddhist monks brought the influence of the Southern Muslim States and Indian Touch in the South Thailand cuisines. Later on, Thai food got influenced by European cuisines after coming in contact with Portuguese missionaries and Dutch traders.

During this time, there was an influence from Japanese culture too. So, you see Thai food has got a variety because of a lot of influences it has got since its origin. This is the reason today Thai food is a unique blend of 5 tastes such as sweet, sour, bitter, spicy, and salty.

As you move from Northern to Southern Thailand, you will see the difference in cuisines. Thailand is a big country. It has a diverse geography which has led to the development of different styles of cuisines. At present, there are four styles of cooking in Thailand like Tom, Yam, Tam, and Gaeng as already discussed in the first paragraph.

The cooking in Northern Thailand is generally milder. In Northern Thailand, people prefer sicky rice. Traditionally, fingers are used to knead and make small rice balls. Also, this was strongly influenced by neighboring Burma with popular dishes such as Kaeng Hang Le, a pork curry flavored with ginger, tamarind, and turmeric.

Even though, there are plenty of meat dishes in Thailand. Historically, meat was always scarce in the villages. So, people preferred eating shrimp, freshwater fish as a main source of protein. People in North East Thailand often fermented the fish, shrimps to increase their shelf-life.

The Central Thailand region offers cuisines that are midway between the North and South. The difference is here people prefer eating fragrant Jasmine rice over sticky rice.

The specialty of central cuisine is that it is home to royal cuisine because it originated in the royal palace and involves a lot of elaborative meals, made by putting together complex techniques.  Cooking elaborative meals is not just mere cooking but an art form.

Southern Thai cuisines are more popular outside of Thailand. The reason is that Southern Thailand is the main tourist region of the country.

In southern cuisines, coconut milk is used in most dishes. Coconut replaces Ghee for frying and people use seafood in their dishes. Appetizers in the South use a lot of cashews whereas coconut flesh is a standard condiment. 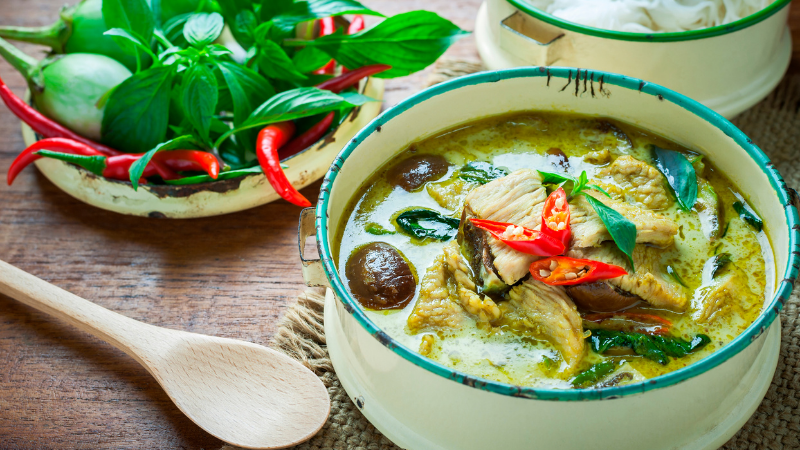 Thai curries are known for their color. The main four colors are green, red, yellow, and orange. Green curry is the hottest of all Thai curries. After green Thai curry comes red and yellow Thai curry versions.

In addition to the basic color Thai curries, there are two other Thai curries that are widely preferred by people and those are Panang and Massaman. These curries have originated in the South of Thailand, with Malay and even Persian influences. These have a thicker consistency of sauce than the other traditional Thai curries. 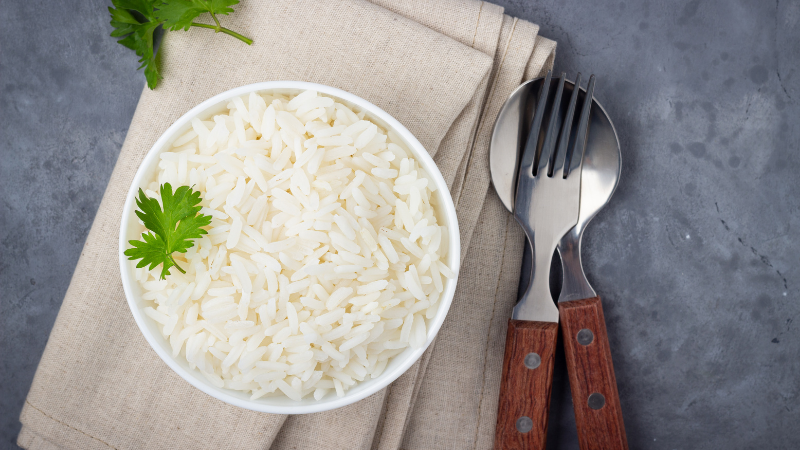 Thai cutlery includes a fork and a large spoon. The spoon is held in the right hand and is used in place of a knife. The eating style is generally like others – eat one dish at a time but it is always eaten with a bowl of rice. Bowls are majorly used for Thai soups.

All the dishes in Thailand are lightly prepared using strong aromatic components and natural Thai spices to give it a mixed flavor of sour, sweet, salty, bitter, and spicy. Cooking Thai food is no doubt easy yet it needs expertise and much attention to detail is required to create the right balance of flavors as well as good presentation. In Thai culture, fish and shellfish are popular foods.

Curries are eaten by people of all geographies. Thai cuisines are majorly known for their flavors, vibrant colors, and aroma. What makes Thai food a delicacy is the numerous spices and fresh herbs that Thai people use in almost every recipe. Let us see some of the most commonly used Thai spices. 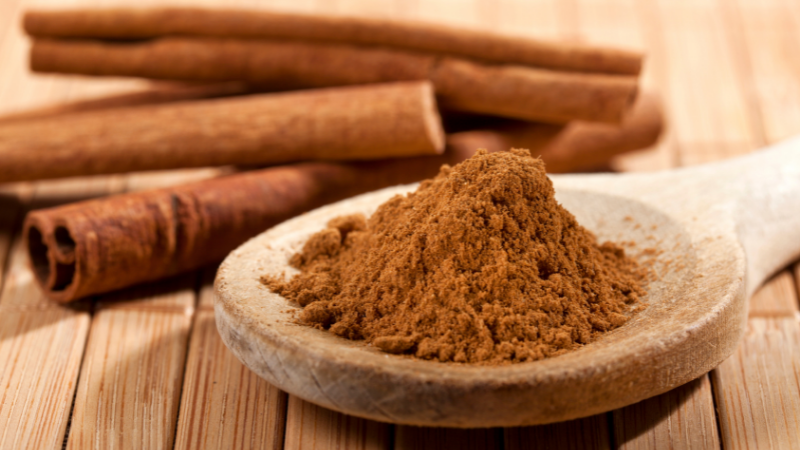 It is one of the most popular Thai spices. Thai people do not use cinnamon the way Westerners do in their dishes. Although it does lend a bit of sweetness, Thai people use it to spice up their soups, stew, like pa-loe soup and braised beef stew.

Coriander is another common herb that people use to garnish dishes. But not many cultures use this root of the herb. Thai people make the paste of this herb and then use it. The flavor and aroma that comes from the root are what makes Thai soups aromatic and flavorful.

Both the roots and seeds are used by Thai people. Chinese people have been using coriander seeds as a Thai spice for centuries in their cuisines. It is earthy and has a nutty flavor. It gives a unique aroma and slight heat makes the spice a great marinade for red meat. People also use these seeds as the base for several curries like panang and massaman. 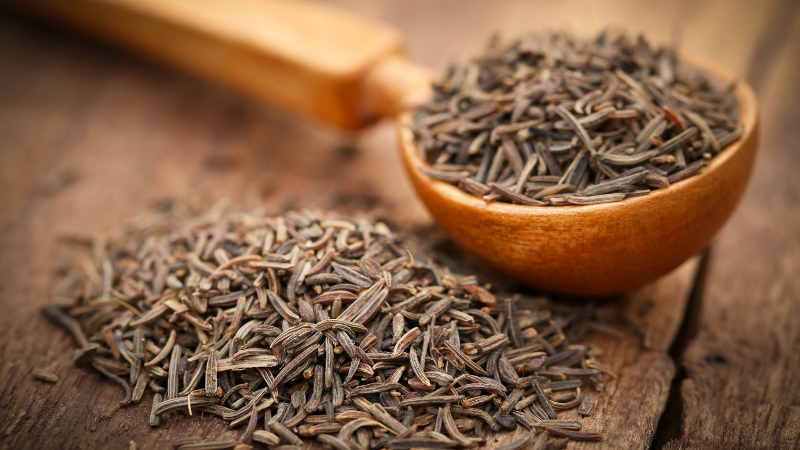 It has a strong and distinct flavor. It is known for its aroma throughout the world. Also, in Thai cuisine, cumin seeds are roasted, pounded, and then mixed with curry paste to accentuate its flavor.  Not just this, you will find this ingredient in almost every Thai dish.

Thai food is known for its heat and spices. It is not surprising to see dried chilies on the list. Also, Thai people use chili in almost everything, right from curries to soups. Besides, they even sprinkle it on the top of noodles to give it some extra spice. 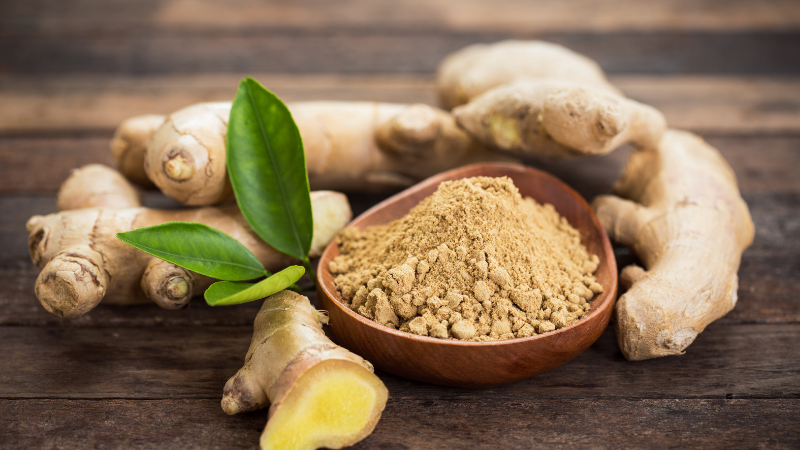 Ginger has a spicy taste. Also, it has medicinal qualities, hence it is often used as a natural remedy to cure indigestion. Much of how Thai people use ginger as a topping in congee, steamed fish, and even in the Chinese vinegar-based sauces.

Garlic is also one of the popular ingredients in Thai cooking. It is also included in stir-fried dishes, soup bases, and curry pastes. Also, sometimes, it is eaten fresh with fatty foods. Not only this but garlic is also used in deep-fried dishes as toppings. Besides, garlic is an important ingredient that you can also find in any regional Thai cuisine.

Young green peppercorns are slightly crunchy. These are aromatic and have heat. Also, these look like green berries. When you pop these into your mouth, you will be surprised by its taste. Other than this, Thai people usually use green peppercorn as an ingredient for stir-fried dishes like pud-kee-mao and choo-chee.

Thai basil, also called holy basil is the main ingredient. It is used in pad kra pao, one of the most famous dishes in the world. Not only this, the distinct aroma and flavors make this type of basil a perfect addition to any type of stir-fried dish. Besides, Thai people also sprinkle fresh basil leaves on top of soups and curries to give it a little bit of an aromatic twist.

After reading all about Thai cuisines and their culture, I am sure you may want to go to Thailand right now. But wait! Even if you think you cannot go, there is nothing to worry about. You can experience Thai culture and eat Thai food by being in Hong Kong. Just visit the best Thai restaurant, Mint, and Basil, in Tung Chung and experience the glory of Thai culture.